It's time to change Burke County!!

BurkeChangers in the News Herald

IN THE NEWS HERALD 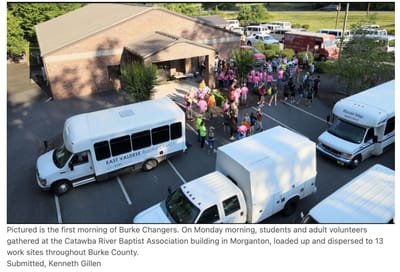 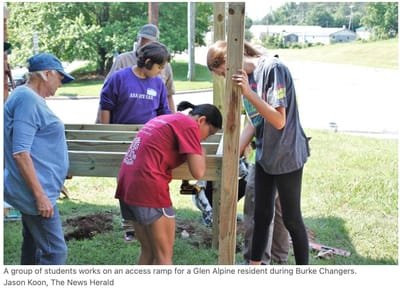 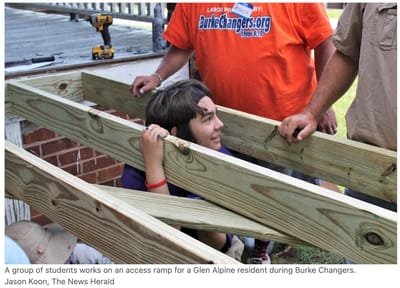 BurkeChangers in the News Herald

Jason Koon Staff Writer
More than 180 teenagers and adult volunteers from more than 15 churches around Burke County banded together for the week to minister to local residents.
The Catawba River Baptist Association (CRBA), a network of 66 Burke County churches, organized the second annual Burke Changers missions camp June 6-8. The local camp started in 2021 to fill the void left when World Changers, a national faith-based missions camp, folded in 2020, in part due to economic hardships surrounding the COVID-19 pandemic. World Changers had hosted mission camps in Burke County from 2016-19, bringing nearly 300 students from across the southeast to the area each summer.
To fill this void, CRBA leaders scrambled to hold a similar event in 2021 which drew 115 students. According to Robby Smith, director of missions for the association, the event this year has grown to include more churches, more students and two extra service projects.
To help organize the work, the association has once again enlisted the help of Foothills Service Project. Started in 1997, by the late R.L Icard, Foothills Service Project builds approximately 200 access ramps a year for Burke County residents over the age of 60, according to Executive Director Scotty Donnelly.

Donnelly and Project Coordinator Andrew Whisenant worked all last week contacting homeowners, measuring and organizing supplies to get ready for the groups.

“We’ve already picked out the projects and (Andrew) makes a rough drawing of it so we can make a materials list,” said Donnelly. “Then we go through and make detailed drawings of each project so the crew chiefs know exactly what they’re building.”

In addition to building access ramps, Smith said the groups also helped with yard work and painting and they spent time walking through neighborhoods praying for and offering to pray with residents.
“We’re praying for the people behind those doors,” Smith said. “We still believe prayer is one of the most powerful tools we have to help people.”
Smith said the goal for the week was to be a blessing to as many people as possible.

“We’re trying to be the best churches for the community,” Smith said. “We want to be a group of churches that want to help make our community better. That’s why we’re out, not only sharing the gospel of Jesus Christ, but putting hands to those prayers. We’re trying to meet needs.”
Each evening, the missions camp concluded with a special event for students and community members. On Monday, the students enjoyed a night of skating and pizza. On Tuesday, students hosted five community block parties in different location throughout the county. According to Smith, the block parties were open to everyone in the community and featured inflatables, live music, free canvas tote bags and two bicycle giveaways at each of the following locations:

On Wednesday, El Bethel Baptist Church hosted a barbecue dinner and closing worship service giving the students and adult volunteers an opportunity to look back over the three days of ministry. Eddy Bunton, student ministries pastor for Burkemont Baptist Church and one of the event’s organizers, said people who received help and their neighbors were invited to join them on Wednesday.
“We’re celebrating something we call ‘Wow moments,’” Bunton said. “Every day, on their sites, students are going to be looking for what we call a ‘wow moment’ which is where we’ve watched God do something through our crew, in our neighborhood or on our project. It’s anything noteworthy we can give God credit for.”
This highlights one of the major reasons event organizers and participating churches said they wanted to stay in Burke County instead of taking mission trips to other communities.
“The whole idea is to get tools in students’ hands so they can learn how to serve and hopefully grow with that through their lives, and also give them an eye to not just go away to serve somewhere, but to realize that there are people in our own neighborhoods,” Bunton said.

He said a ministry like this also gives leaders an opportunity to include every student who is interested.
“When you do something locally, you’re not having to worry about housing or how you’re going to feed everyone,” he said. “Because it’s not a travel trip and it’s not a huge expense, it lowers that baseline so there’s no one excluded.”
Whisenant hopes the projects helped the students see that everyone has something they can offer.
“Sometimes students don’t know that they have a talent until somebody gives them a drill or a hammer to do something with it,” Whisenant said. “And they say, ‘wow, this is actually fun, I can do something to help.’”

CLICK HERE TO READ THE ARTICLE IN THE NEWS HEARALD

We would love to have you or your business partner with us to help change Burke County in a positive way!

Thank you for your prayers & partnership!

Until then feel free to contact us at:
Partner@burkechangers.org CONTACT CRBA OFFICE  TO REGISTER YOUR GROUP OR YOURSELF AS AN INDIVIDUAL!

((THIS PARTICIPANT CONSENT FORM IS REQUIRED TO PARTICIPATE!!))

The CRBA in partnership with Burke County Youth Ministries.

The projected cost is ONLY: $50 per person! 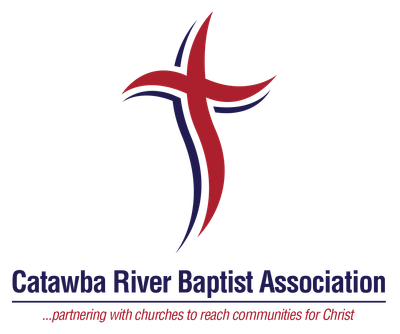 Please register your Church, Ministry, or Group as a BurkeChanger 2023 partner ASAP! DUE ASAP: $50 Non-refundable Group Registration Fee. This fee covers all administrative costs, so that we can keep the participant cost down to only $50 per person! You also need to register each participant & pay the $50 fee by JUNE 12th - PARTICIPANT REGISTRATION DEADLINE Make sure that you prior to the deadlines so that we can plan appropriately to accommodate everyone and to prepare for all of our worksites. Thank you! PARTICIPANT REGISTRATION: JUNE 12th Crew Chief Training & Job Assignments August 12th 8am - Noon

Ticket Type
Price
Qty
Total
Burke Changers CHURCH / GROUP REGISTRATION
$50.00
$50.00
0
$0.00
Please register your Church, Ministry, or Group right away so that we can plan appropriately to accommodate everyone and to prepare for all of our worksites. Thank you!

A new 'PERSPECTIVE'
An attitude of 'HOSPITALITY'
All for the 'GLORY' of God!

Burke Changers in the news herald

A group of Burke County churches is planning a youth-focused missions blitz to serve the community and strengthen the faith of local teenagers. The Catawba River Baptist Association, a partnership of 68 Baptist churches, is sponsoring Burke Changers, a missions day camp that will run Sunday through Wednesday. During the four-day camp, middle and high school students from nine local churches will participate in worship and prayer, service projects, a barbecue and several community block parties hosted by churches across Burke County. The program is patterned after World Changers, a nationwide faith-based missions camp emphasizing student missions and community service, said Robby Smith, director of missions for the association. Between 2016 and 2019, Burke County hosted a World Changers camp, bringing hundreds of students from across the southeast to Morganton to serve the community for one week. In 2020, however, Lifeway discontinued the program, sending Catawba River Baptist Association leaders scrambling for a way to continue the annual community service effort. “When sharing the news with several youth pastors, we began to pray about how God might use us to do something similar, but on a local basis,” Smith said. “That was when the idea of Burke Changers was born.” He said the Rev. Greg Klapp, minister of children and families at Burkemont Baptist Church, has been instrumental in organizing the program. He also credited pastors and youth pastors from across the association for their contributions to the program, including opening their churches to host activities and providing volunteers, meals and other supplies to support the effort. Burke Changers will kick off Sunday evening with a worship service and a brief training workshop for student participants at Burkemont Baptist. After that, each day of the mission camp will feature the same basic schedule. Students will meet each morning for a short prayer time before dividing into their work crews and going out into the community. Crews will work through the day, breaking at 3 p.m. for showers, free time and dinner. Each evening, the students will reunite at 6 p.m. for evening activities, including roller skating at Pavilion Roller Skating, a pizza party and a barbecue hosted by El Bethel Baptist Church. Smith said the week’s key event will take place Tuesday. That night, four local churches will host community block parties in locations across the county. These parties are open to the public and will feature free food, games, bounce houses and door prizes. Burke Changers students will help run the events, which are designed to help local churches make connections with families in the surrounding neighborhoods. “We hope these block parties will be a blessing to the families in our community,” Smith said. “They will also provide an opportunity for Burke County families and our churches to become better acquainted. Our CRBA churches are committed to making our communities better while sharing God’s word and love with all who will listen.” Following Jesus’ command to neighbor-love is an important theme, not just for the Tuesday evening block parties but also for the entire Burke Changers camp, Smith said. He noted that Foothills Service Project has been instrumental in helping organizers set up service opportunities and will have volunteers at the work sites to train students to do the work. “Foothill Service Project is a wonderful ministry,” Smith said. “They have discovered local families who need help, and with our students supplying the labor, we will be able to minister to several local families who are in need.” Over the three-day missions camp, about 115 students will complete projects, including painting, building access ramps and repairing roofs. Smith hopes that this will only be the beginning of what Burke Changers will accomplish in the coming years. “We are planning for this to become an annual event,” Smith explained. “It is wonderful to see students and adults from different ethnicities and backgrounds work together like this to share the love of Jesus, to make him known and impact the community.” The Burke Changers community block parties will take place from 6-8 p.m. A grand prize of two children’s bicycles will be given away at each location. The parties will be held at: Fisher Mobile Home Park, 5125 Crawley Dale St., Morganton; hosted by Burkemont Baptist. Mount Home Baptist Church, 2272 Mount Home Road, Morganton. Walker Road Baptist Church, 100 Walker Road, Morganton. Valdese Housing Authority, 1402 Lydia Ave., Valdese; hosted by East Valdese Baptist Church. For information, call the Catawba River Baptist Association at 828-437-0137.

END_OF_DOCUMENT_TOKEN_TO_BE_REPLACED

Foothills Service Project is a 501(c)(3) non-profit Christian home repair ministry established for the purpose of assisting persons in Burke and surrounding counties to make homes dry, safe, warm, and accessible. Our project is committed to honoring the God-given dignity and value of all people, regardless of race, color or creed. We intend to promote the physical, and the spiritual health of all those who need help but are lacking knowledge or physical ability to help themselves with emphasis on assisting the older adult population. Our ministry is possible only because of the many caring people willing to help others in need.